Report a Loss
File a claim and report a loss in our claims center.
Claims Center

Become an Agent
Fill out a quick application and, upon review, we'll contact you with further information.
Registration

Locate an Agent
Our independent insurance agents are among the top in the industry. Find one of them today!
Agent Search 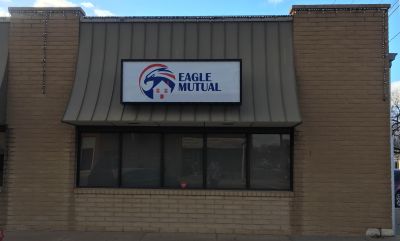 Eagle Mutual was first organized on April 12, 1896. The company is located in Ellinwood, Kansas which is a town of about 2,500 located in Barton County in the heart of Kansas. Nestled between Cheyenne Bottoms Wildlife Area and Quivira National Wildlife Refuge, and along the banks of the Arkansas River, right on US 56 Highway in rural Central Kansas.

First organized under the name of “German-American Farmers Association of Barton County, Kansas.” The company then became the “Union of German Farmers of Barton County and Vicinity, Kansas” in 1899 this occurred as the company first officially formed to “support, instruct, and promote custom in cooperation with the Farmer in a Mutual Way.” Synonymously through the end of the 1890’s and early 1900’s the company was referred to as “Barton County German Farm Insurance Company,” although that name may have never been official, and the records prior to 1906 have forever been lost. In March of 1916 the company first became a chartered corporation with the State of Kansas with records showing the name was changed at that time from “German Mutual Fire Insurance Company” to “German Mutual Fire and Lightning Insurance Company.” However, in 1918, as WWI was nearing an end, anti-German sentiment was high and rumors spread that the company was sympathetic to the German cause. Therefore, in April 1918 the company name was changed to “Farmers Mutual Insurance Company of Barton County” which remained for many years.

Even more interesting than the name change is the fact that the official language of the company, including all records and policies, was German. Many of the company founders were also decorated German military members prior to leaving Germany for the United States, settling in Barton County on farmsteads as homesteaders in the late 1800’s. There was a very rich German heritage to our founders and to the company in its early years. However, due to that anti-German sentiment in WWI, the company changed the official language to English, with the records being in German up through that vote and the next line in the minutes being in English.

From 1918 till the late 1900’s the company operated mainly in Barton and surrounding counties of Kansas, with limited offering beginning with only Fire and Wind then expanding to Fire and Extended Coverages. Yet in 1987 the company sought to expand geographically and renamed once again to the most recent former name of “Farmers Mutual Insurance Company” dropping the “of Barton County” at that time. Along with the statewide expansion in the 1990’s, the company began to offer Liability and packaged Homeowners / Farmowners coverage.

The 1990’s were a challenge for the company with many years of consecutive losses, in the early 2000’s the market was in favor of the company with large increases in production and profitability. However, that cycle of losses returned following a very hard market in reinsurance. This drove retentions high the years of 2006 through 2009, and were some of the toughest years in the history of the company. As a result of those losses the company restructured and laid forth a recovery plan which focused on reducing exposure as more clearly defining a niche to remain competitive within. Consequently, since 2010 the company has written exclusively coverage on a Basic or Broad form Actual Cash Value basis with great success. Adding to that niche a commercial offering of similar coverage structure in 2018 that focuses on insurance coverage that fulfills our goal of continuing the “Mutual Way” which has always been core to our company through the mission that remains to “Provide Kansans with insurance protection that is reliable and personal.”

Even though the company has changed its name a few times throughout company history, the name usually included “Farmers”. Current reality is that the company has moved away from insuring active farmers over the past quarter century. As modern farms and farming equipment needs grew to be active or successful in farming operations, the farm exposures have increased in value creating a severity of risk which the company could no longer maintain without undue risks. For the past few decades, the company’s focus has been on residential exposures and has only recently expanded to cover small commercial exposures in rural Kansas communities, thus no longer corelating to the use of “Farmers” within the name. Additionally, over the history as Farmers Mutual Insurance Company the company once benefited from the leading name being similar to others in the industry. In recent years this has become troublesome, there is constant confusion due to the name. Agents, vendors, customers, and many others often confused the company with, or believed the company was a part of, other companies with that began with “Farmers…” or “Farmers Mutual…” Therefore, reducing the recognition of the company into a position where our identity and image were blurry at best.

To gain, or regain, an identity and to have a recognizable image within our Agents and Policyholders that continues to stand for our core values. In 2023 Farmers Mutual Insurance Company name was changed to Eagle Mutual.

Today, Eagle Mutual has a network of more than 200 independent agencies throughout the state of Kansas. Through these independent agents, Eagle Mutual provides property insurance protection throughout the state of Kansas. Markets include owner occupied, tenant occupied, or vacant/seasonal residential or small commercial properties, yet with many additional insurance solutions for Kansas homes and businesses.

We feel that our agents and customers have freedom with choosing our company. We offer the freedom to insure at ACV with coverage options that allow tailoring of coverage to suit the needs of many Kansans. And we strive to do so with a clarity at inception of the policy, to provide clear understanding down the road. We owe that clarity, that consistency in performance, the sharpness of an Eagle eye. To not only the specific risk we are accepting but to our policyholders as a whole, because we are Mutual and that “Mutual Way” is our core as Eagle Mutual.

Eagle Mutual leadership is a Board of Directors composed of Policyholders of the company. The Directors meet Quarterly to monitor and advise management on the performance of the company, imparting direction to the management for the benefit of the company and its policyholders. Annually the Directors meet in a Strategic Planning Session to separately discuss the future of the company. In this Planning Session the Directors guide the future of the company through the development of goals and strategies for the management guided staff to take action upon. The Directors and management also maintain some statements of Company values that serve as a Business Model (shown below) to aid in guidance for decision making and goal setting. It is those underlying values that truly direct the discussions, decisions, and direction we purse in performing our mission, “Provide Kansans with insurance protection that is reliable and personal.”

The Business Model of Eagle Mutual has and is focused on the needs of the policyholders in underserved areas throughout Kansas with underserved insurance products we are able to provide. To continue this effort, it is the company’s strategy to earn more income than expenses to increase policyholder surplus and the security that provides to all policyholders.

The actions of the company shall be centered on insurance protection for policyholders where the standard or preferred insurance market fails to provide coverage. Eagle Mutual views this to be in areas of the state and/or within risk classifications that are underserved by other markets.

Eagle Mutual understands that it can only insure according to statutory requirements of the State of Kansas and at the level of charter currently authorized by the Kansas Insurance Department for risk classifications available.

Beginning as a Fire only company, Eagle Mutual understands that all-encompassing peril coverage is not always necessary and that not all perils in all instances are insurable or would meet the reasons noted herein to be of service to policyholder. Therefore, Eagle Mutual shall focus on named peril policies and coverage.

Eagle Mutual believes to remain in service to policyholders and other underserved Kansans (potential policyholders), that it must achieve profitability and continue to grow the company.

Eagle Mutual is committed to the utilization of agents to distribute its products and shall take actions to foster those relationships and allow ease of doing business with those agent/agency partners.

Technology plays an important role in the company operations and shall be utilized to enhance and administer the service to policyholders as reasonably beneficial and available.

Eagle Mutual believes its staff is an asset to policyholders in that through having well skilled, capable, and personable staff the service to the policyholders is exceptional. That having a staff from the local rural based community benefits that community by providing good paying professional positions locally. In addition, this also benefits the Kansans that we serve by an ability to relate more closely from the same or similar setting.

Reinsurance is needed to provide a level of protection greater than Eagle Mutual could provide alone to policyholders, these Reinsurance partners are an important asset to Eagle Mutual and we value their relationship and backing of our risk exposure.

Eagle Mutual believes that to do business there are required strategic relationships with vendors and associations that provide services, education, advocacy, and other resources with shared values.